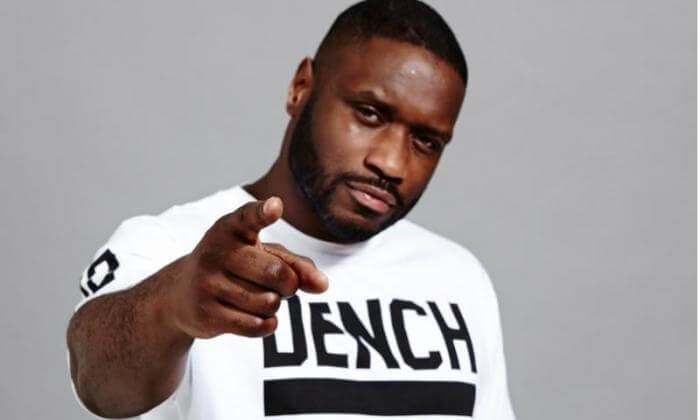 He is best known for his early emergence in the newly founded grime scene/community.

Not only that, but Lethal Bizzle has also experienced an admirable amount of success in the charts.

Outside of music, Lethal has managed to propel his personal brand ‘dench’ along with his cousin Emmanuel Frimpong (ex arsenal footballer) to great heights.

This begs the question, what is lethal Bizzle net worth.

Lethal Bizzle net worth has come predominantly from his pursuits in music but has been complemented by his brand ‘Dench’ and endeavours in the TV industry.

His net worth is estimated to be between 7-8 million pounds.

Lethal would start out in music when he set up the group ‘More fire crew’ which included Ozzie B and Neeko.

Maxwell would first experience chart success with the group with their song ‘Oi’ which would reach the number 7 spot.

Ironically this would be his highest-placing song, including his solo career.

The group would go on to produce an album and a few follow-up songs but would not be as well received.

More fire Crew would disband shortly after leaving Lethal to pursue his career in music solo.

in 2005 Lethal would release his song ‘Pow’ also known as ‘Foward riddim’.

Despite being banned from airplay due to references to gun culture, it managed to reach the number 11 spot.

It would also go on to win him a MOBO award for best single.

He then followed up this successful song with ‘Uh oh’ and ‘What we do’ which reached the 34th and 23rd spot respectively.

Unfortunately, lethal’s first album ‘Against all oddz’ didn’t do as well as he would’ve liked but still capped out at the number  89 in the Uk album charts.

On December the 10th 2010 lethal would release an updated version of pow hoping to reach the Christmas number 1 spot.

It started out as a joke but turned out there was real support behind it from his fans.

It would reach the number 33 spot in the charts.

Not bad considering it started out as a joke.

It was around this time that lethal would begin to experiment with other genres including house, dance and dubstep.

Some of his best songs in this experimental period were ‘Not a saint’ and ‘Party right’, both appearing in the top 30.

His return to grime/rap would bring about another successful song with Tempta t and JME called ‘Rari workout’.

It would peak at number 11, tied with 2 other songs to be his highest placing song as a solo musician.

It was this song that allowed him to propel his newfound brand ‘Dench’ by wearing the merchandise in the music video.

Since this point, Bizzle would release his 3rd album ‘Lennox rd’ and his EP ‘You’ll never make a million from grime’.

This would feature artists such as Skepta and Mostack.

Conclusion On Lethal Bizzle Net Worth

Lethal Bizzle has been in the music industry for a long time, experimenting with different styles of music.

No matter what genre he has pursued, he’s managed to place in the charts.

Not many people have been as versatile as him in the music industry.

He has done well to market his personal brand through his music and has been compensated well as a result.

If you enjoyed this post on Lethal Bizzle net worth, have a look at celebrities net worth posts such as:

If you want to know more about Lethal Bizzle’s life, check out his Wikipedia for more.