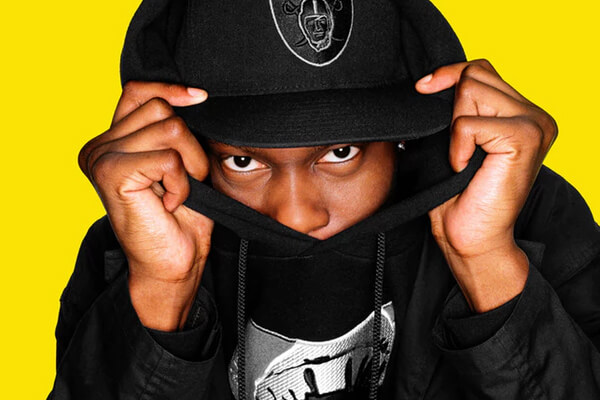 Dizzee is perhaps most famous for his debut album ‘Boy Da The Corner’ which was instrumental in the development of grime as a music genre.

According to his Official Chart profile, Dizzee has:

That’s perhaps one of the most impressive chart profiles we have come across on this blog.

This is a testament to his longevity in the music industry alongside factors such as his loyal fanbase.

Dizzee Rascal net worth has come from a combination of record producing and his career as a musician.

Dizzee Rascal net worth is estimated to be between 4-5 million pounds.

Dylan Kwabena Mills, better known by his stage name Dizzee Rascal, is an English musician who was born on October 1st 1985 in London, England.

Dizzee was the son of a Nigerian father and a Ghanian mother.

Unfortunately, Dizzee’s father would die when he was younger, resulting in his mum raising him as a single pavement,

Dylan admits that he was somewhat a disruptive youth, always getting into trouble, particularly at school.

After being expelled from various schools, he would finally settle down in the only lesson he wasn’t kicked out of, music.

His teacher encouraged him to produce music on school computers and it was from here his passion was discovered and harboured.

At the age of 14, he would become an amateur drum and bass DJ.

Occasionally his music would air on pirate radio with the likes of Wiley and Tinchy Stryder.

It would not be until 2003 with the release of ‘Boy In Da Corner’ that Dizzee would experience a good deal of success.

The album featured the instant classics ‘I Luv U’, ‘Fix Up Look Sharp’ and ‘Sittin’ Here’.

For this album, he would not only gain mainstream notoriety but the prestigious Mercury award later that year.

Up next came his album ‘Showtime’ which seemed to eclipse the success of ‘Boy In Da Corner’ as it entered in the number 8 on the albums chart.

‘Maths + English’, his third studio album, released on the 4th June 2007, would be nominated for a Mercury Prize.

Unlike the prior albums, ‘Maths + English’ didn’t necessarily have any standout songs but was appreciated as a whole.

If anyone had any doubts about him as a musician as a result of this fact, he would prove them wrong with his 4th studio album.

It was initially announced on the tv show ‘Friday Night With Jonathon Ross’ in which he gave some details about the album.

It was another one for the history books, his ability to package his flow and style successfully is admirable.

Fast forward to today and you’ll find Dizzee Rascal operating as the CEO for his label ‘Dirtee Stank’.

Having said this, he hasn’t entirely stayed away from producing his own music, having given a release date for his album entitled ‘E3AF’.

If you want to support the release of his new album or buy merchandise, I recommend checking out his site dizzeerascal.co.uk.

What Nationality Is Dizzie Rascal?

Does Dizzie Rascal Have An MBE?

Yes- he was awarded an MBE for his contributions to the UK music industry.

How Old Is Dizzee?

Conclusion On Dizzee Rascal Net Worth

It’s fair to say Dizzee has had such a successful and eventful career in music.

Not many musicians in today’s times can consistently produce well-received albums as he has.

His unique style and flow have harboured a strong fanbase for many years and I’m sure that nothing will change in that respect moving forward.

If you enjoyed this post on Dizzee Rascal net worth, consider checking out some of my other net worth posts, namely: